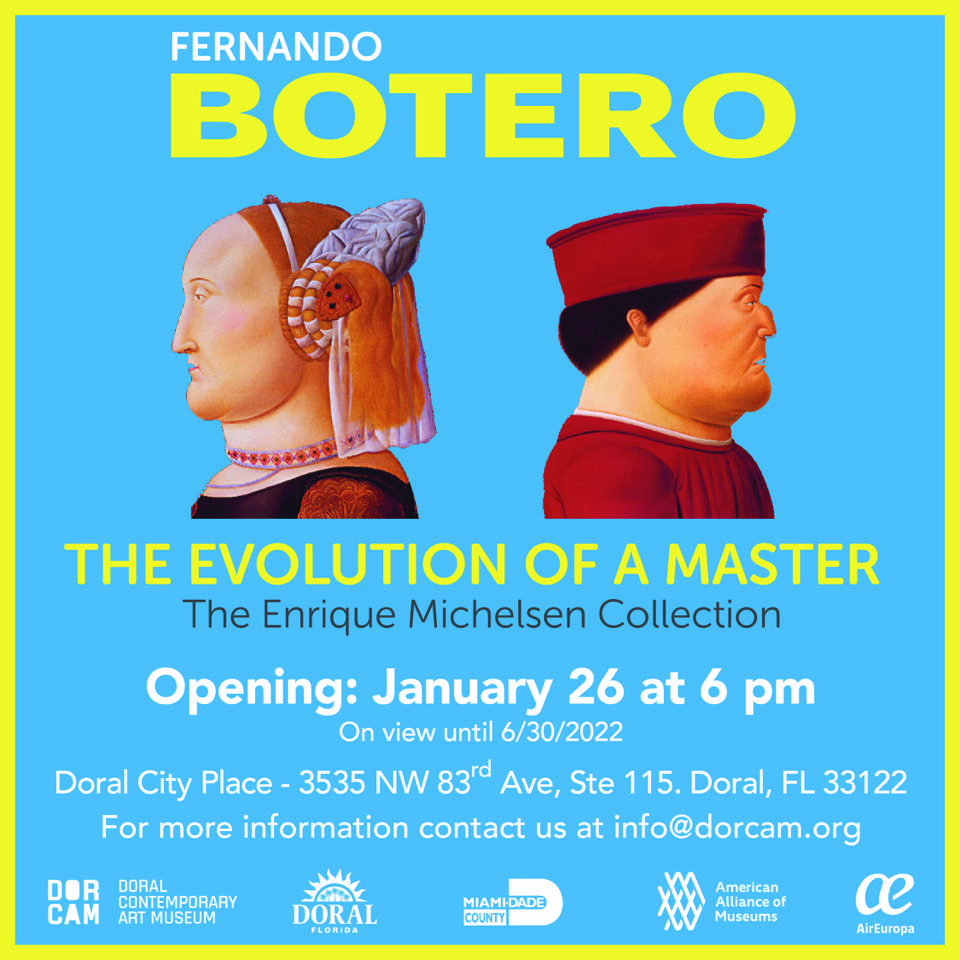 The Doral Contemporary Art Museum (DORCAM), in coordination with Adriana Meneses Art and David Restrepo Art, is pleased to host the pop-up exhibition, “Botero at Full Volume,” at CityPlace Doral. The exhibition, which showcases the graphic art of the celebrated Colombian artist Fernando Botero, opens to the public on Jan. 26 and will remain on view until June 30, 2022. The museum will celebrate the exhibition with a VIP reception on Jan. 26 at 6 p.m.

Botero is known for paintings and sculptures that, with their gargantuan dimensions, appear to overflow galleries and cities around the world. However, the thick figuration of the Colombian has also flooded a field of plastic for a long time that is sometimes considered, unfairly, a minor art.

“Botero at Full Volume” introduces 45 posters from collector Enrique Michelsen’s poster collection, “Fernando Botero, The Evolution of a Master,” which chronicles Botero’s career since the beginning. In 1977, Michelsen acquired his first Botero poster dedicated to the World Theater Festival held that year in Nancy, France. Michelsen’s collection, which began as a hobby, became a document of the artist’s life, because his posters reveal the magnitude of Botero’s career. “Only by visually going through his posters is it possible to measure his extraordinary presence in the art world,” said Michelsen.

The main themes of Botero’s thick and colorful graphics – either in small, medium or large format – depict bullfighting, religion, the nude or nature. Like artists Toulouse-Lautrec, Daumier and Manet, Botero showcased his art to the general public, many who did not visit galleries and museums.

Born in Medellin, Columbia in 1932, Botero was struck by the creative impetus during his adolescence. He abandoned the apprenticeship of bullfighting to devote himself fully to painting, although bullfighting remained a theme in his artwork. He once confessed that he has done it all not by academy, but by intuition and work: “for pure passion.”

Although the influence of Diego Rivera, Rousseau, Velázquez or Goya can be appreciated in his work, Botero’s histrionic passion for painting volume suddenly appeared while he was painting the mandolin in a still life in 1956. His goal is not to paint fatness and gigantism, he believed the feast of volume was its own visual rite to celebrate sensuality and beauty and described it as “an exaltation of life.”

“Through our partnership with Doral Contemporary Art Museum, we are excited to offer CityPlace Doral guests and the local community art and cultural initiatives for the whole family to enjoy,” said Mauro Olivieri, General Manager at CityPlace Doral.

“‘Botero at Full Volume’ highlights the importance for the viewer in observing the master’s work in parallel to the evolution of the art of communication and graphic design in the last five decades,” said Marcelo Llobell, director of the Doral Contemporary Art Museum and co-curator of the exhibition.

🌴 It's The #Weekend in South #FLorida and #Livi