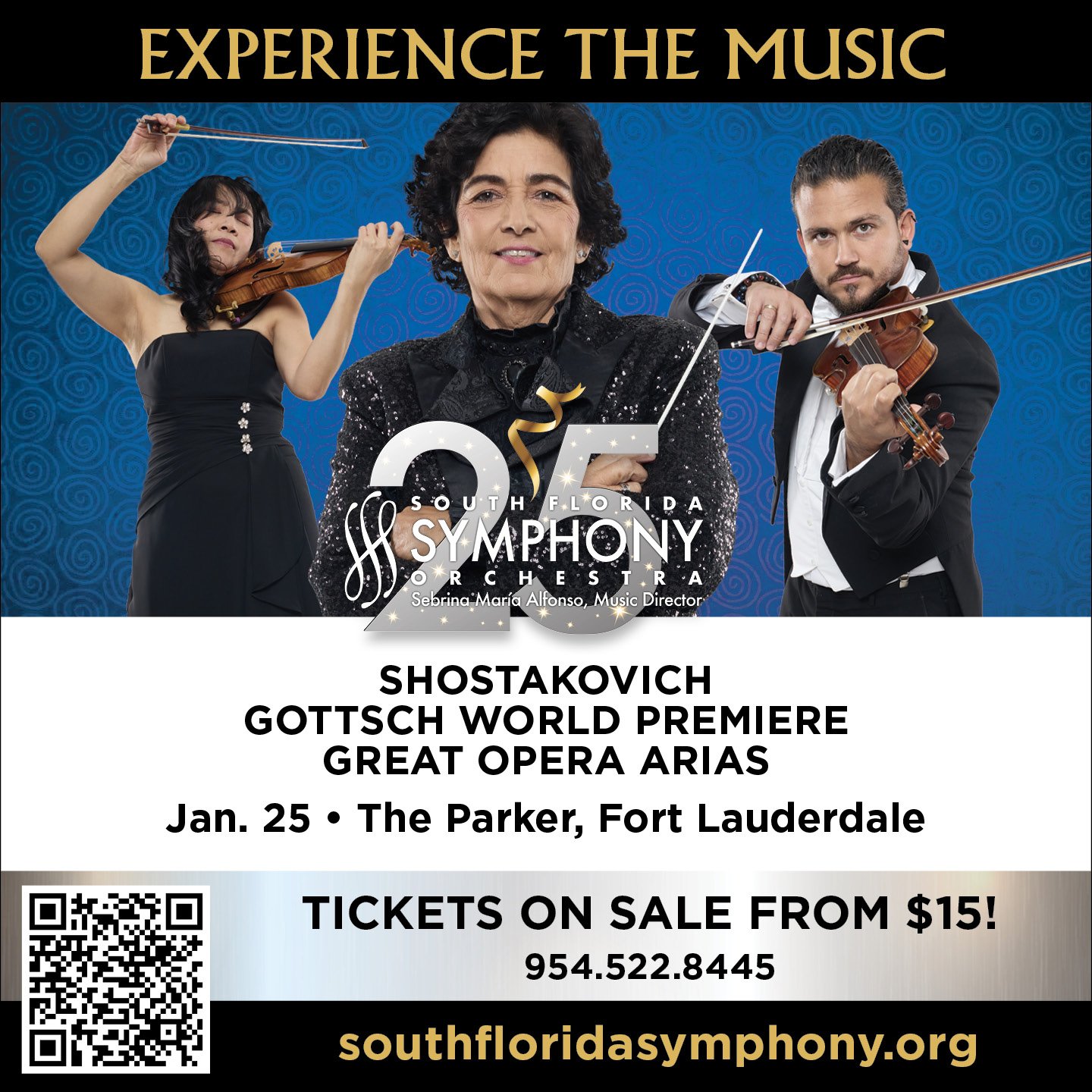 South Florida Symphony Orchestra’s (SFSO) 25th anniversary season continues to shine with Shostakovich’s Symphony No. 9, the world premiere of Ocklawaha by composer-in-residence John Gottsch, and a selection of great opera arias from Puccini, Verdi, and Lara. Led by Music Director Sebrina María Alfonso with guest soloists Catalina Cuervo, soprano, and Adam Diegel, tenor, the Masterworks program is scheduled for 7:30 p.m. on January 25 at The Parker in Fort Lauderdale.

Originally intended to be to a grandiose piece that would glorify Stalin’s regime and Russian victory over the Nazis in 1945, Shostakovich’s Symphony No. 9 rendered a more complex, thoughtful and sometimes carefree composition. The composer was known for his resistance to the Soviet rule and his subversion tactics often promising to compose the piece the regime wanted while actually giving it something else.

SFSO’s composer-in-residence John Gottsch will present the world premiere of Ocklawaha. The Ocklawaha is a river originating in the lakes of central Florida and flowing north through some of the most mysterious, wild, and breathtakingly beautiful parts of the state. As a young boy, the composer traveled the Ocklawaha with his father, learning the history of the river and surrounding lakes, that brought to life on passing shores, the escaped slaves, Seminole warriors, and a Civil War battle. The musical narrative brings to life the storied struggles of Florida’s Native American ancestors through thoughtfully arranged orchestral movements.

John D. Gottsch was born in New Orleans, Louisiana and moved to Florida with his family, shortly thereafter. He spent his youth in the lake country of the Sunshine State traveling extensively and observing natural habitats. These explorations of Florida gave him an enduring love for its beauty and wildlife. He has been a lifelong composer and a number of his compositions reflect his deep appreciation of the outdoors. Last year, SFSO premiered the live performance of Gottsch’s original composition Princess Yurievskaya, and in 2020, SFSO premiered Sunset, both of which were featured on Gottsch’s 2020 debut album released by Naxos Records, the world’s leading classical music label. SFSO also performed Gottsch’s Bagatelles for Violin & Piano as part of its Summer With the Symphony Series in June 2021. His piano suite, Homosassa, premiered in Palm Beach in 2020. His piano quintet, Maryland Hunt, premiered at the Embassy of the Kingdom of the Netherlands in Washington, DC in 2018 and has been performed in Philadelphia, Vienna, Rotterdam and Baltimore. Gottsch, a full-time doctor, now splits his time between Baltimore and Key West.

Upcoming SFSO concerts include Brahms, Sibelius and Berlioz on February 15, an all Dvořák program on March 22 and season closer Rachmaninoff and Bruckner on April 26.

Tickets for the Masterworks II program start at $15 for The Parker. Tickets may be purchased by visiting southfloridasymphony.org/2022-23-season or by calling (954) 522-8445.

👗 Reminder! This Sunday is the Sunday Stroll Fa