Home » Events » Save $5 Beatles On The Beach

Event Series: Save $5 Beatles On The Beach

Save $5 Beatles On The Beach 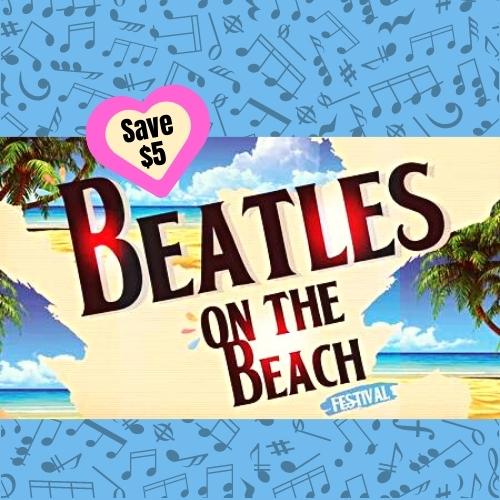 The International Beatles On The Beach Festival™ – Thursday – December 15 to Sunday – December 18, 2022. Four FAB Days of Sun, Fun, Love and Music in Beautiful Delray Beach, Florida, with over 20 venues and the entire Village by The Sea joining in, dressing up, and celebrating the iconic music of The Beatles. This year’s festival is dedicated in memory to John Lennon, whose music is still ALIVE today, over 40 years after his passing! This iconic legend will be memorialized as thousands Sing-A-Long to IMAGINE and All The Beatles classics plus Holiday music!


Delray Beach, FL/ The annual International Beatles On The Beach Festival, a four-day city-wide ‘Experience’ will commence Thursday – December 15 to Sunday December 18, 2022.
Beautiful Delray Beach, FL will host a multitude of artists, headline performers and musicians during the four-day FAB Fest. The roster includes the ever-popular Micky Dolenz of The Monkees! With Over 75 million records sold by The Monkees, he will be performing all The Monkees hits, The Best of The Beatles & Holiday classics! A Stellar performance will make for a perfect evening under the stars. Terrifically impressive, Imagine this Stunning Re-Creation of the Iconic music of The Beatles and The Monkees!

Saturday night, December 17, The World’s Best Beatle Band, Liverpool Live, Accompanied by The Academy Orchestra, conducted by Maestro Thomas Servinsky, promises to have a spectacular multi-media extravaganza performing selections from Sgt. Pepper, Abbey Road, Let it Be and The White Album. Hailed as a monumental production, Beatles On The Beach was completely SOLD OUT in ALL past performances!
A CAN’T MISS!!

Special Guest appearance by Mark Hudson An American record producer, musician and songwriter known for his work producing nine albums with Ringo Starr! He has been majorly successful working with a broad variety of artists including Cher, Ringo Starr, Aerosmith, Scorpions, Ozzy Osbourne, Hanson, Harry Nilsson, and so many others!
A boatload of live performances by Beatle Bands from around the world will rock you for four FAB Days. https://beatlesonthebeach.com/lineup-2022/
A highlight of the Fest is BeatleCon, a major event, where you get to dress in costume as your favorite Beatle, Rockstar, Superhero, Harry Potter character, Blue Meanie, Pirate, Game of Thrones, or favorite 60’s & 70’s hippie! Dress up, participate and have FUN!!
FAB Prizes Awarded for best costumes!

Celebrity Symposium with Micky Dolenz of The Monkees, and special celebrity guests reminiscing about their wild Beatles stories.
Beatles Bar Crawl involving participating restaurant/bars with specialty Beatles drinks such as Beatle Beer, Me and My Monkey Margarita & Strawberry Fields Forever Frozen Daiquiri!
Magical Mystery Mini-Golf, Beatles Yoga, Beatles Art Show, Abbey Road Replica and Car Show, I Saw/Met The Beatles: A meeting and discussion with people who have met a member of the FAB Four or seen The Beatles live! GREAT stories shared!

NEW this year, a Beatles Art Exhibition “The Art of Sir Paul McCartney, Ringo Starr, John Lennon & George Harrison” brought to you by Ringo Starr’s Art Publisher Neal Glaser, devoted to presenting the finest artwork available by the celebrated members of The Beatles. A truly eclectic collection of hand signed fine art by The Beatles Themselves! Neal, who has established ties to the rock music world, is coming to town with his Super Fab Exhibition!

The four-day, interactive calendar of events is produced with an abundance of Sun, Fun, Love & Music, kicking off Thursday as the city hosts bands from around the world in its thriving restaurant/pub circuit, paying tribute to The Beatles! Local merchants are rolling out the red carpet with countless cool incentives to ticket holders that include travel and discounted accommodations at the centrally located host hotel; Hyatt Place Delray Beach. https://beatlesonthebeach.com/hotels-accommodations/

Ticket holders receive discounts and FREE Food and drink all Across the Universe. The Delray Universe of course, the whole town gets involved!! Yes, Delray Beach turns into Beatleville!
FAB FILMS! The Delray Beach Public Library will feature a different Beatles themed movie each day with a Guest Host Presentation! Contact the Library and see Schedule on our Website!
The Beatles Bar Crawl and Scavenger Hunt will be hopping with cool venues such as Johnnie Browns, Throw Social, Tin Roof, Silver Ball Museum, The Falcon, Blue Anchor, Crazy Uncle Mikes, and many others featuring a tasting menu of munchies, Beatle drinks, prizes and swag galore to round out the festivities. Selling out fast The all-inclusive, day or weekend passes start at only $29.50 per day or an affordable full event, 2-day VIP Credential for $155.50. A signed copy of the award-winning time-travel novel Saint John Lennon, authored by producer, Daniel Hartwell. Will be available at The event! https://www.SaintJohnLennon.com

Over 10,000 celebrants were attracted to our FAB past Beatles events; 2022 also promises a British Invasion with a Woodstock vibe. The line-up is chock-a-block with Beatles tribute bands arriving from ports of call that boast Finland, Brazil, Israel, and of course USA FAB favorites! Visit the website frequently for additions to the all-star line-up and new sponsorship partners. https://beatlesonthebeach.com/lineup-2022/

About the Producer – Daniel Hartwell’s legacy, to date, features successful concerts, festivals and philanthropic Networking Events that consistently engage audiences, the performers, local merchants & the community. While best known for producing major international music festivals and large concerts; Hartwell’s United We Rock, LLC ® produces with a passion, niche events for major corporations and charities. Alice Cooper to Alice in Chains and talent as diverse as Diana Ross to Kid Rock have appeared on Hartwell’s stages. Besides organizing giant festivals, Hartwell is also a published author of the Award Winning Novel, Saint John Lennon. A time travel adventure about the late great John Lennon. A Favorite read among all Beatles fanatics!