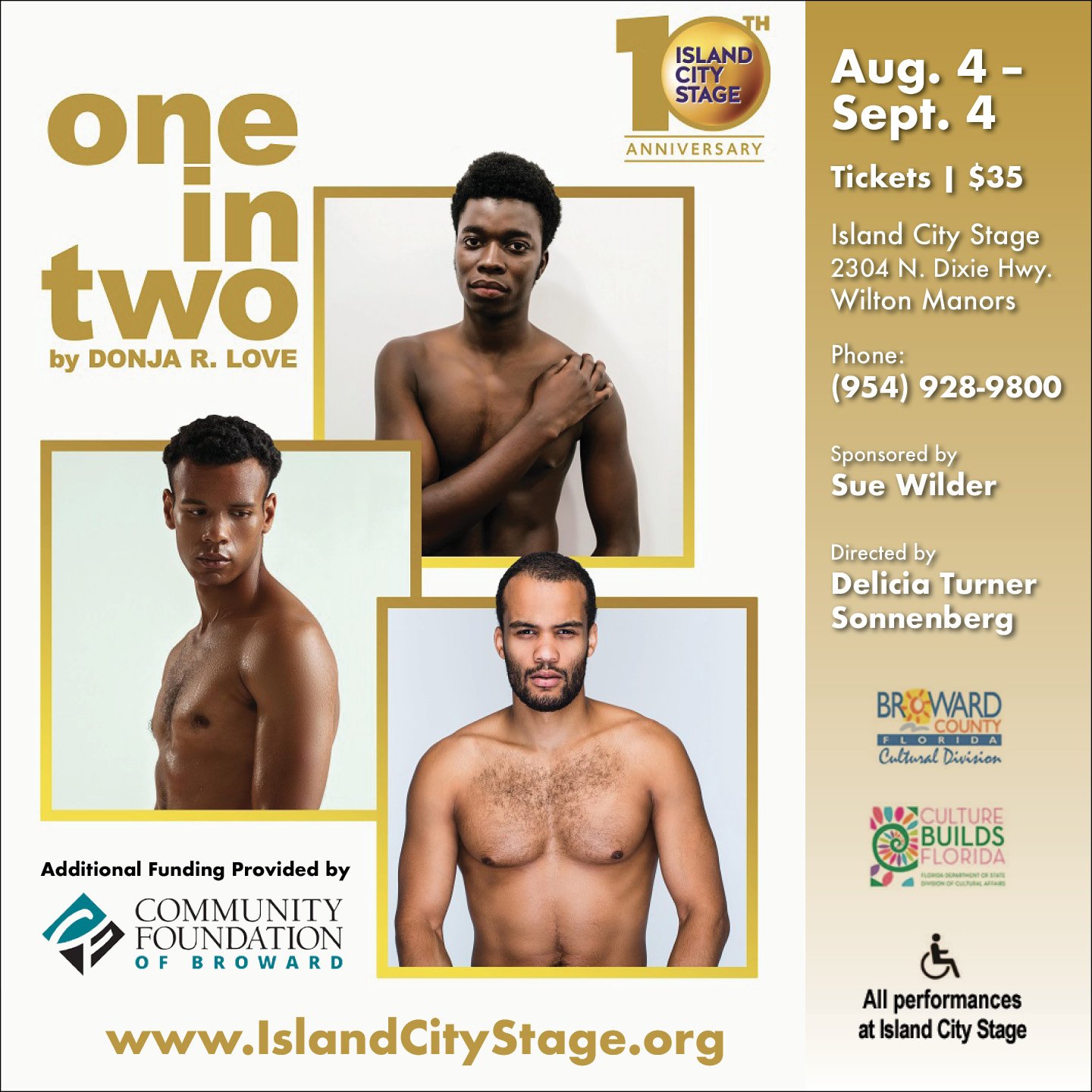 Three actors sit in an ethereal waiting room. Each performance, the audience chooses which actor must portray the lead character of a Black man diagnosed with HIV in Island City Stage’s newest production of “One in Two,” by Donja R. Love. This compelling story, an unflinching portrait of being Black and gay in America today, will run from August 4 – September 4, 2022. “One in Two” is the last production of the award-winning theater company’s 10th Anniversary 2021-22 South Florida Season.

Directed by San Diego’s Moxie Theatre co-founder and NAACP theatre award-winner Delicia Turner Sonnenberg, “One in Two” refers to the current HIV projection rate that 1 in 2 black men who have sex with men (MSM) and 1 in 4 Latino MSM in the United States will be diagnosed with HIV during their lifetime, according to a 2016 analysis by researchers at the Centers for Disease Control and Prevention (CDC). Unlike other plays, in this production, the audience chooses nightly which actor must portray the fated lead character.

Randall Swinton is a local South Florida talent who does double duty onstage as an actor and as technical crew behind the scenes and backstage. Swinton has appeared as Joey Biltmore in “Guys and Dolls” (MNM Theatre), Cliff in “Luna Gale” (Boca Stage), Sticks Pig in “Shrek the Musical” (Slow Burn Theatre), Arvin in “Zanna, Don’t!” (Island City Stage) and as Harold Smith in the interactive crime mystery show “The Art Heist Experience” (Right Angle Entertainment). He is excited to be working with Island City Stage, once more.

Nathaniel J. Ryan has appeared on both stage and screen.  His most recent stage credits include ”Topdog/Underdog” and “Fences” among many others.  His film and television credits include “The Blacklist,” “Blue Bloods,” “Random Acts of Flyness” and the independent feature film “Luv Don’t Live Here.”

“One in Two” is sponsored by Sue Wilder with additional support from Community Foundation of Broward, the Broward County Cultural Council and Florida Department of State Division of Arts & Culture.

Island City Stage’s 10th anniversary 2021-22 season kicked off with “The Twentieth Century Way” by Tom Jacobson in October, followed by “Armature” by Andrew Kramer and “Suddenly Last Summer” by Tennessee Williams and “The Mystery of Irma Vep: A Penny Dreadful” by Charles Ludlam. “One in Two” by Donja Love is the company’s final season performance.

Island City Stage is located at 2304 N. Dixie Highway in Wilton Manors. Show tickets are $35 each and are available at islandcitystage.org/one-in-two.

🍹 📚️ #Dangerous #Libations With A #Literar

Please join us This Wednesday, September 28, 6pm a