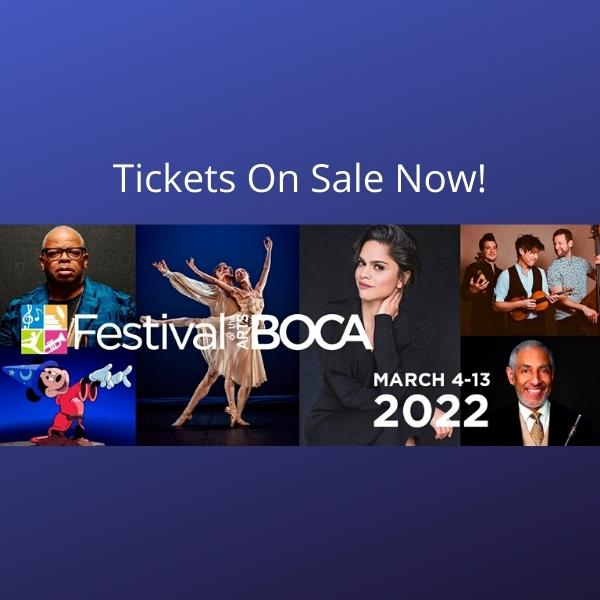 Today and tomorrow are the last two days of our Holiday discount (Ends Dec. 31).
Just use the discount HURRY22 at checkout to save.

BOCA RATON, FLORIDA (December 2021) – The 16th Annual Festival of the Arts Boca, March 4 – 13, 2022, will welcome two-time Oscar® nominee, and five-time GRAMMY®- winning trumpeter and composer Terence Blanchard to the Mizner Park Amphitheater, 590 Plaza Real, on opening night, Friday, March 4 at 7:30 p.m. This concert is presented in partnership with FAU/Dorothy F. Schmidt College of Arts and Letters, with support from the Dorothy F. Schmidt Eminent Scholar in the Arts Endowment.

Blanchard will replace Bobby McFerrin, who had to withdraw for health reasons. Tickets purchased for McFerrin’s performance will be honored for this performance.

“Terence Blanchard is an icon and truly ‘jazz royalty,’” said Joanna Marie Kaye, executive director of Festival of the Arts Boca. “We are thrilled to have him kick-off our 16th Annual event with the Florida premiere of this show.”

Best known for scoring Spike Lee films, Blanchard made history in October by becoming the first black composer presented by the Metropolitan Opera in its 138-year history. He comes to Boca Raton with his internationally acclaimed band, the E-Collective, and the double GRAMMY®-winning Turtle Island Quartet, in a program from his new album, Absence, a tribute to the legendary jazz saxophonist Wayne Shorter.

Other Festival highlights include an Opera Gala Concert featuring soprano Larisa Martinez, who regularly appears with Andrea Bocelli, and with her husband Joshua Bell. Martinez is making her Festival debut, along with some special guests, in an evening of opera favorites with Festival Orchestra Boca under the baton of Constantine Kitsopoulos. A Night at the Ballet will feature stars from American Ballet Theatre, New York City Ballet, and more, performing excerpts from the classics including Don Quixote, Swan Lake and Romeo & Juliet, as well as contemporary works, such as She’s a Rainbow, by the Rolling Stones. The Disney classic film Fantasia will be screened on a massive LED screen above Festival Orchestra Boca as they perform the soundtrack live. Time for Three, known for standing at the busy intersection of Americana, modern pop, and classical music, returns to the Festival; and Grammy Award-winning South Florida favorite, jazz flutist Nestor Torres and his band, close out the Festival on March 13.

The Authors & Ideas program features Richard Haass, president of the Council on Foreign Relations and author of A World in Disarray: American Foreign Policy and the Crisis of the Old Order, and James Stavrides, author and retired four-star U.S. Naval officer. The two will join in a discussion about global events. The series will also feature award-winning and internationally acclaimed global warming expert and author, Bill McKibben, who will talk about “Our Changing Climate;” NASA Astronaut, Donald Pettit; and novelist Luis Alberto Urrea, hailed by NPR as a “literary badass,” who uses his dual-culture life experiences to explore greater themes of love, loss and triumph.

Festival of the Arts BOCA March 4 – 13, 2022
Presented by The Schmidt Family Centre for the Arts
Mizner Park Amphitheater

Sunday, March 6, 7:00 PM
Performance – A Night at the Ballet featuring dancers of American Ballet Theatre, New York City Ballet and more performing excerpts from the classics including Don Quixote, Swan Lake, and Romeo & Juliet, as well as contemporary works including “She’s a Rainbow,” by the Rolling Stones.
Mizner Park Amphitheater

Tuesday, March 8, 7:00 PM
Authors & Ideas – Bill McKibben: Our Changing Climate One of the foremost environmentalists speaks about climate change and where we are going.
Mizner Park Amphitheater

Wednesday, March 9, 7:00 PM
Authors & Ideas – Nasa Astronaut Donald R. Pettit: The View from Above. America’s oldest active astronaut and an esteemed photographer, Donald Pettit offers a view of our planet from the perspective of one who has two very long stints in space.
Mizner Park Amphitheater

Thursday, March 10, 7:00 PM
Authors & Ideas – Luis Alberto Urrea: From Tijuana to the World: NPR called Luis Urrea a literary “bad-ass.” The author and passionate humanist will join us for a talk about life in a dual culture.
Mizner Park Amphitheater