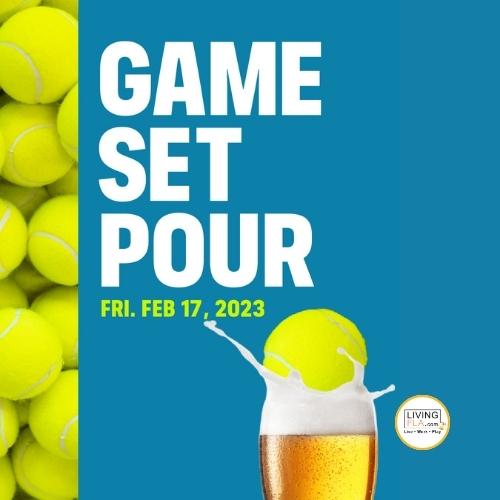 “Game, Set, Pour is a fan favorite at the Delray Beach Open,” said Adam Baron, Director of Business Development. “This event is not just an opportunity to enjoy some of the best food and beverages Palm Beach has to offer, but it also raises awareness and benefits a deserving local charity.”

The event’s charity partner is Kula Cares Inc, (https://www.kulacares.org), a Boca Raton-based non-profit organization that provides essential items for schools and community programs to empower under-resourced students and teachers. They aim to improve the lives of children in disadvantaged communities by building self-esteem and investing in their futures.

“Kula Cares is honored to be the charity partner of Game, Set, Pour for the third year,” said Vaughan Dugan, Founder & CEO of Kula Cares. “Going back to school can be scary for any child but for children living in extreme poverty not having adequate supplies to learn makes it even harder. With the support of generous organizations like the Delray Beach Open and our local community, we can help set more children up for success.”

Tickets for Games, Set, Pour: General Admission tickets from 6:30pm to 8:00pm cost $95 + tax per person (250 available); VIP Access tickets from 5:45pm to 8:00pm include a VIP Welcome Pour commemorative glass and 45 minutes of exclusive tasting, for $115 + tax per person (200 available). All tickets to the event include a general admission seat ticket to the evening’s pro tennis matches. If you wish to upgrade your seat type, please contact the box office for pricing options at561-330-6000 x 1.

All individual session tickets for the Delray Beach Open are on sale and start at just $42. Weeklong series packages can now be secured for a $100 deposit. Veranda series packages have already sold-out, but a variety of series packages are still available starting at $750, including reserved seats, courtside box seats and on-court “Best Seats in the House.” Packages include parking and exclusive amenities, as an all-inclusive deal. A Finals Weekender package starts at $300 and includes quarterfinals through finals tickets. Visit www.YellowTennisBall.com, call 561-330-6000 or email info@YellowTennisBall.com for more information.

Disclaimer – Match schedule, including number of sessions, dates, times, number of matches and players scheduled are subject to change. Tickets are not eligible for refund or exchange.

The Delray Beach Open is televised nationally on the Tennis Channel and internationally in more than 50 countries. The combined ATP 250 and ATP Champions Tour Legends event welcomes 60,000-plus spectators annually while hosting corporate events, amateur tennis tournaments, live music performances and social happenings over the 10 days.

About the ATP: As a global governing body of men’s professional tennis, the ATP’s mission is to serve tennis. We entertain a billion global fans, showcase the world’s greatest players at the most prestigious tournaments, and inspire the next generation of fans and players. From the United Cup in Australia, to Europe, the Americas and Asia, the stars of the game battle for titles and Pepperstone ATP Rankings points at ATP Masters 1000, 500 and 250 events, and Grand Slams. All roads lead towards the Nitto ATP Finals, the prestigious season finale held in Turin, Italy. Featuring only the world’s top 8 qualified singles players and doubles teams, the tournament also sees the official crowning of the year-end ATP World No. 1, presented by Pepperstone, the ultimate achievement in tennis. For more information, please visit www.ATPTour.com.

About the ATP Champions Tour: The ATP Champions Tour brings together many of the greatest tennis players in history for competitive and entertaining tournaments around the world. Players are either formerly ranked No. 1 in the world in singles, a Grand Slam singles champion or finalist, or a singles player on a winning Davis Cup team. Players must be retired from ATP Tour competition and each event can invite wild card entrants of its choice. The Delray Beach Open features a 3-day format.

About The City of Delray Beach: In southeast Palm Beach County, along the Atlantic seashore, a Village by the Sea that began as an agricultural community in 1895 has become one of Florida’s most popular destinations for visitors, new families and seasonal residents. The City of Delray Beach encompasses slightly over 16 square miles with a permanent population of nearly 65,000 and growing. The city’s charm continues to garner national awards. In 2017 alone the city received three awards: the “All-America City” award from the National Civic League (NCL) for literacy strides (the NCL also recognized Delray Beach in 1993 and 2001), a “Playful City USA” designation for providing 24 playgrounds for residents, and the recognition of Atlantic Avenue as one of the “10 Great American Shopping Streets” by USA Today. In 2012 during the nationally televised “Best of the Road” special, Delray Beach was chosen by Rand McNally, USA Today and the Travel Channel as the “Most Fun Small Town” in America. In 2014, USA Today named Delray as one of the “Best Atlantic Beaches in Florida.”

👗 Reminder! This Sunday is the Sunday Stroll Fa