An event every week that begins at 11:00 pm on Friday and Saturday, repeating until Saturday, September 25, 2021 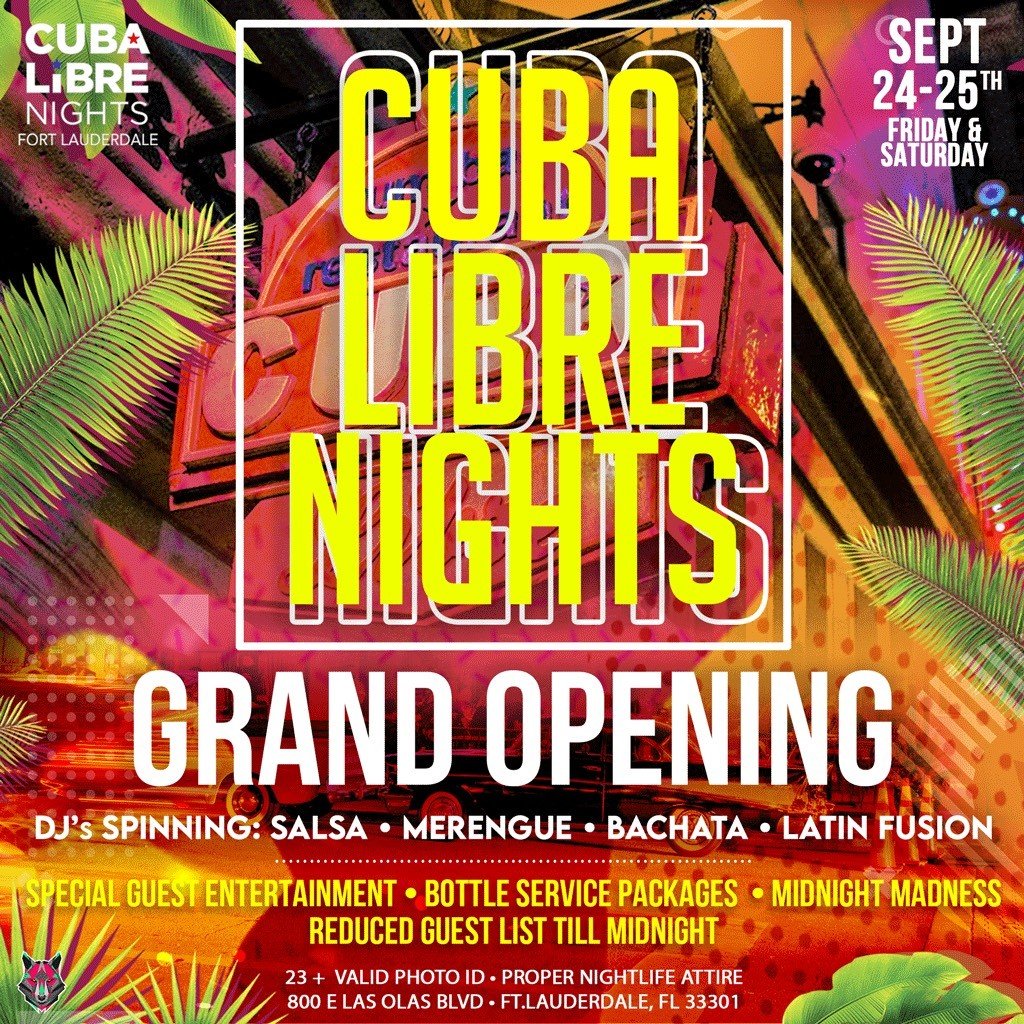 Even before the dance floor opens, dinner guests each Friday and Saturday will get a taste of nightlife with professional salsa dancers performing tableside beginning at 9 p.m. At 11 p.m. these same dancers usher in “Cuba Libre Nights” and invite guests to dance with them as they officially open the dance floor to guests. Guests can look forward to dancing the night away to the sounds of salsa, merengue, bachata and Latin fusion by resident DJs DJ Xander spinning on “Rumba Fridays” and DJ Joey Tracks playing on “Bailamos Saturdays” until 3 a.m.

DJ Xander was born and raised in Miami to Cuban parents and has been DJing professionally for more than 15 years, performing at numerous local hotspots throughout South Florida, the Caribbean, and South America. His exceptional skills on the turntables and professionalism have earned him much credibility and enabled him to perform private events for multiple A-list clients such as Sony, MTV, Lexus, LG, Redbull, and American Express. He’s performed alongside artists like Tyrese, Eric Benet, Musiq Soulchild, Estelle, Ludacris, Alejandro Sanz, Romeo Santos and more. DJ Xander has also made guest appearances at local radio stations such as Wepa.FM, 93.9 Mia, Rumbera FM, and Power 96.

Leading “Bailamos Saturdays,” DJ Joey Tracks is one of Miami’s top nightlife DJs, specializing in high-energy Latin/open format dance music. He’s worked at clubs with performances by artists such as Omarion, Flo-Rida, SakNoel, Plan B, and is the official DJ for Diego Val (NBC The Voice Finalist). Joey Tracks is also a resident DJ at the Miami Salsa Congress and the Bachateando festival that takes place in South Beach every year. He has the ability to blend rhythms and produce crowd-pumping mixes that have won him recognition as a party mover in Miami’s world-famous club scene.

‘Cuba Libre Nights’ is launching in celebration of National Hispanic Heritage Month (September 15 – October 15). As part of the month-long celebration, guests are invited to raise a glass to freedom as Cuba Libre debuts its new “Esperanza Sparkling Mojito,” a limited time offering crafted by Cuban-born and Miami-bred master mixologist and U.S. Ambassador for Bacardi’s Havana Club brand rum, Giovanny Gutierrez. A portion of the proceeds from the sales of the new cocktail will benefit Cuba Decide, a non-profit, non-partisan citizen driven organization working to bring change to Cuba’s political system. In addition, patrons can also take advantage of a special three-course menu ($35 per person) for Dine Out Lauderdale until September 30, as well as enjoy a special prix-fixe “Esperanza” menu ($39 per person) featuring decadent aperitivos (starters) like pineapple guacamole cubano, tuna ceviche nikkie, Mama Amelia’s empanadas and more, platos fuertes (main entrees) like ropa vieja, vaca frita and Cuban roast pork, plus the choice of a delicious dessert, including tres leches cake and Cuban flan, from October 1 through October 15.

“Cuba Libre Nights” is open to guests 23 and older. A cover charge and dress code apply for those entering after 11:00 p.m. For more information, please visit https://cubalibrenightlife.com/ftl/ .

Cuba Libre Restaurant & Rum Bar is located at 800 East Las Olas Blvd. in Fort Lauderdale, FL. The popular concept, now with five locations, launched to much critical acclaim in Philadelphia in 2000, followed by Atlantic City in 2004, Orlando in 2008, Washington, D.C. in 2010 and Fort Lauderdale in April 2021, providing guests with a passport to Cuba’s intriguing flavors and cuisine. The restaurant’s name, which translates to “a free Cuba,” signifies hope for the future of the treasured island nation. The company’s mission is to provide an “escape” to Havana through exciting food, beverage and entertainment experiences that celebrate the Cuban people and culture. Two-time James Beard award-winning Chef-Partner Guillermo Pernot’s menus feature tantalizing tastes that reflect Cuba’s culinary traditions, as well as the emerging modern cuisine that he is experiencing during his continuing travels to Cuba.

Cuba Libre Restaurant & Rum Bar is poised for expansion into new markets with multiple new locations being planned. Principals Barry Gutin and Larry Cohen bring a unique combination of hospitality and expertise to each of their projects and have been partners in the hospitality business since 1995. For more information, please visit www.CubaLibreRestaurant.com.

📣 This Friday, Join Us for the Friday Night Car