Comedy on the Green in Boca Raton 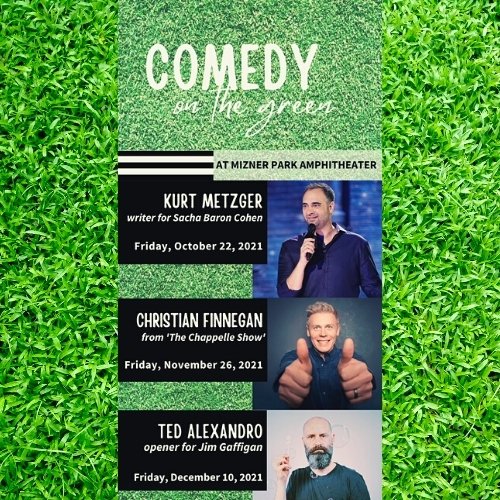 COMEDY ON THE GREEN

“We are excited about bringing our vision to life in Boca Raton,” said Dave Siegel, a stand-up comic by night, who developed and produced the concept together with his wife, Stephanie Tsoflias Siegel during the lockdown.  “We moved to this area last year, at the peak of the pandemic, and had an idea to create an outlet merging our passions for comedy, entrepreneurism and creativity.  Comedy on the Green was conceived.”

Dave Siegel is a news writer/producer out of New York City but his roots are in stand-up comedy.  Prior to his big move to Boca Raton in March 2020, he’d been a writer for Diane Sawyer and Anderson Cooper among many others. Currently, he’s a writer/producer and on-air talent for Ashleigh Banfield’s NewsNation show ‘Banfield.’  He headlines comedy clubs across the country, has appeared on Comedy Central on two occasions and has been the opening act for the likes of David Alan Grier, Richard Lewis and Kevin Nealon, among others.

“After the year we have all had, everyone can use a night of cheer.  Comedy on the Green is an experience like no other in this area,” said Stephanie Tsoflias Siegel, a former broadcast journalist in New York City.  “From the top-notch talent to the socially distanced seating options, we hope to leave our audiences coming back for more.”

The dynamic duo put a lot of thought into the open-air seating offerings to provide attendees with a comfortable, lofty and socially distanced experience – on their own “mini lawns.”  Ticket tiers include:

For tickets and more information: www.comedyonthegreen.org.

Kurt Metzger is an Emmy and Peabody Award winning writer and producer who recently played a series regular alongside Alan Alda, Jessica Lange, Steve Buscemi, and Edie Falco on Horace and Pete. He is best known for his work on Inside Amy Schumer where he earned two Emmy nominations and one win.  He has appeared on Comedy Central’s Roast Battle, @Midnight, The Nightly Show with Larry Wilmore, This Is Not Happening, Late Night with Jimmy Fallon, Comedy Knockout, What’s Your [email protected]#King Deal!?!, The Approval Matrix, and more. He also wrote for Chappelle’s Show, The Jim Norton Show, Dave’s Old Porn, Ugly Americans, the Comedy Central Roasts, and numerous award shows including the MTV Movie Awards and the Spike TV Video Game Awards.  His hour special, “White Precious” is available on Comedy Central

A staple of the New York City stand-up comedy scene, Christian Finnegan has starred in two of his own Comedy Central stand-up specials and as one of the original panelists on VH1’s ‘Best Week Ever.’  Many will always know him as “Chad,” the lone white roommate in the classic Chappelle Show sketch, ‘The Mad Real World.’  In addition to headlining comedy clubs across the country, Christian was also a co-star on TBS’ “Are we There Yet?” and Comedy Central’s “Tough Crowd with Colin Quinn.”

Ted Alexandro is every comedian’s favorite comedian.  During the week, he’s in the regular rotation at the world-famous Comedy Cellar in Greenwich Village, but he has also traveled the world as the opening act for both Jim Gaffigan and Louis CK.   Ted has had two of his own Comedy Central specials and has made numerous appearances with David Letterman and Conan O’Brien.

For tickets and more information: www.comedyonthegreen.org.