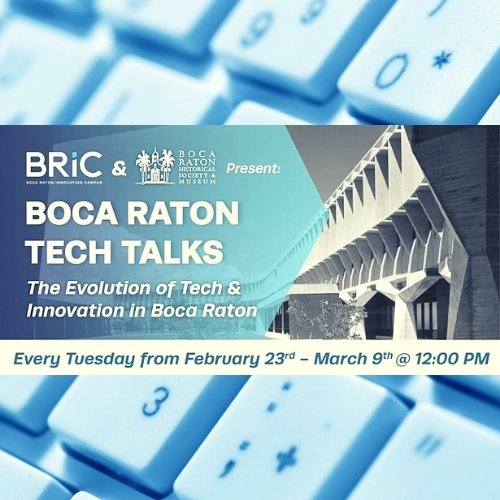 Join us for a virtual 3-part series as we set out to discover the history of how a resort community became a revolutionary tech incubator.

We’ve partnered with the Boca Raton Historical Society & Museum for a three-part series highlighting the world-renowned tech advances and rich history of Boca Raton – a “resort- community” turned revolutionary tech incubator. Together we will dissect how early Boca Raton innovations have shaped the lives of our community today.

Mark your calendars for #TuesdayTechTalks. | Every Tuesday from February 23rd to March 9th @ 12:00 pm. Speakers from IBM, Modernizing Medicine, FAU Research Park, Sensormatic, Siemens and more will guide you along the Boca Raton technological era from the 1940s-1981; 1980s-2000s; and 2010 into the future.

Together we will dissect the technology of radar, and the Boca Raton Army Air Field known as the Air Corps’ sole war-time airborne radar training base. We’ll also introduce IBM’s arrival in town in 1967 and the manufacturing of small mainframe computers. Did you know Boca Raton, Florida is the birthplace of the ancestor of all PC style computers? In this panel you’ll learn more about worldwide production for the first personal computer and IBM’s incremental process.

Throughout this panel discussion, you’ll get an inside scoop of the technology scene and innovations from the 1980s through the 2000s featuring industry leaders from STRAX, Sensormatic, Siemens and IBM.

How has our historic past in Boca Raton shaped our community in the 21st century? Get the VIP exclusive on where the local technology scene is today and what we can expect in the future, directly from industry leaders from Modernizing Medicine, FAU’s Research Park and Boca Raton Innovation Campus (BRiC).

We are excited to connect with the Boca Raton Historical Society & Museum and share the deep-rooted technological seeds of Boca Raton. Join us on an exploratory tech journey through the 1940s to the 2000s and beyond.