An Evening with Celebrity Housewives at The Studio Mizner Park 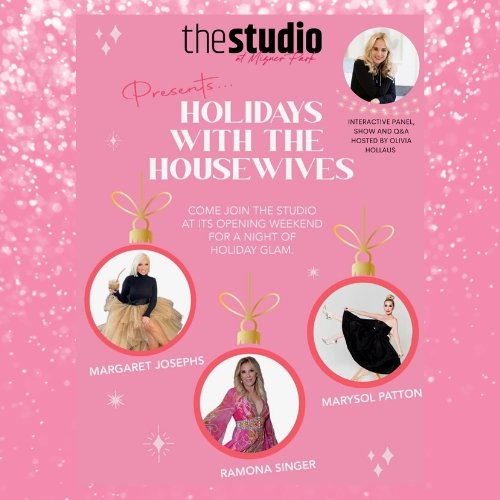 RING IN THE HOLIDAYS WITH THE HOUSEWIVES

AT THE STUDIO AT MIZNER PARK ON SATURDAY, DECEMBER 17TH

to Dish About Life in the Limelight

BOCA RATON, FLORIDA – The Studio at Mizner Park, 201 Plaza Real, will celebrate its grand opening weekend with “Holidays with the Housewives,” and celebrity housewives Ramona Singer, Margaret Joseph and Marysol Patton, on Saturday, December 17 at 8 p.m.  The trio will light up the stage in a lively discussion about life on television.  Interactive holiday games will be part of the evening, with audience participants randomly selected.

Tickets range from $69 to $99 per person.
Admission to an exclusive VIP Meet & Greet and cocktail reception with the housewives, starting at 7 p.m., is $99 per person.

Currently in her sixth season on Bravo’s The Real Housewives of New Jersey, Margaret Josephs is a designer, entrepreneur, lifestyle expert, TV personality, podcast host and author.  Known for her quick fire one liners and no-nonsense approach, Margaret applies this attitude to all her passions including her philanthropic endeavors and her newest project, her line of mocktails “Soirée.”

“I can’t wait to mingle, jingle and celebrate the holidays at The Studio at Mizner Park,” said Margaret.

Ramona Singer is television personality, entrepreneur, real estate agent, and author.  She is best known as a main cast member on The Real Housewives of New York City, in which she has starred in the first 13 seasons from 2008 to 2021.

“I am so excited to have some holiday fun with everyone in Boca,” said Ramona.  “It’s going to be a fabulous night!”

Miami native Marysol Patton was cast as one of the original Housewives of Miami that aired from 2011-2013, with a comeback in 2021.  In addition to her role on the Real Housewives of Miami, Marysol has made appearances on Millionaire Matchmaker, Real Housewives of Atlanta, Real Housewives of Beverly Hills, and Shahs of Sunset.  Marysol owned The Patton Group, a public relations and events agency that handled media and put on one-of-a-kind events for some of Miami’s top luxury affairs and international brands.  Marysol retired in 2016 and recently married Steven McNamara, the love of her life.

“What’s better than a night out with three Housewives?” said Marysol.  “Can’t wait to meet everyone!”

For more information, and to purchase tickets, visit www.thestudioatmiznerpark.com

🐝 The New Bees Knees Diner in Delray Beach⁠ i

✨ Tickets On Sale for The 16th Annual #BocaRaton