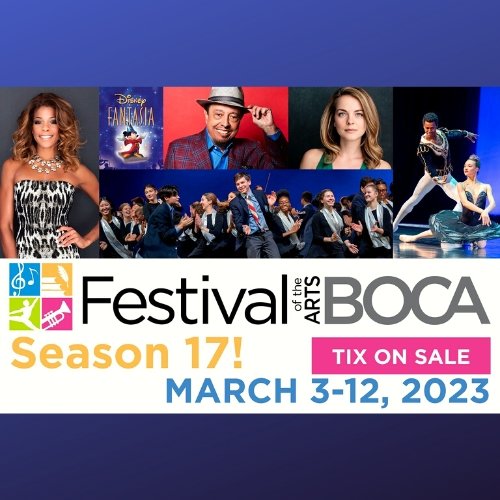 Sergio Mendes, Fran Liebowitz, Festival Orchestra Boca and “A Night at the Ballet” Headline a Celebration of the Arts, Community, and Education in South Florida!

Reserve Seats Now and Save – Early Bird Pricing While They Last!
EARLY BIRD DISCOUNTS for select performances
$29 through Nov 21
$39 through Dec 12
$49 through Dec 31
(Use Discount Code “Early” At Checkout)

BOCA RATON, FLORIDA – Tickets to the 17th Annual Festival of the Arts Boca, presented by the Schmidt Family Centre for the Arts, set for March 3 – 12, 2023, will go on sale Tuesday, November 1.  The much-anticipated event returns to the Mizner Park Amphitheater, 590 Plaza Real in Boca Raton, with a celebration of the arts through performances, lectures, and conversations.

“From the Young People’s Chorus of New York City and Young Singers of the Palm Beaches to the Rotary Club Future Stars Competition, this year’s program highlights our mission of promoting the spirit and talent of our youth,” said Joanna Marie Kaye, executive director of the Festival of the Arts Boca.  She adds that everyone can attend worry-free: “The audience will continue to enjoy our open-air tented venue with ample, well-spaced seat placement.”

The Festival opens on Friday, March 3 at 7:30 p.m. with Disney’s classic film Fantasia, remastered and projected on a giant screen and accompanied by Festival Orchestra Boca playing the soundtrack, conducted by Constantine Kitsopoulos, Festival Music Director.

Returning to the Festival is the legendary three-time Grammy award winning musician Sergio Mendes and Brasil 2023, in an exclusive South Florida performance, and the very popular A Night at the Ballet: From Tchaikovsky to the Rolling Stones, with an all-star cast performing the most beloved classical ballets and new works set to contemporary music. Nicole Henry: Time to Love Again, will showcase one of our most acclaimed jazz singers in a new concert featuring her newly released CD, accompanied by a seven-piece band.


The Authors & Ideas program features Lynne Olson, our era’s foremost chronicler of World War II politics and diplomacy, presenting WWII: Women in the Resistance, discussing one of the most crucial and effective spy networks during that time; 90 minutes with the inimitable Fran Leibowitz, author, actress and social commentator; and Charles Fishman, one of our most respected and engaging journalists discussing The Big Splash, how water is the foremost global challenge and an exploration of possible solutions.

Established in 2007, Festival of the Arts BOCA was designed to promote the cultural arts and to enrich the quality of life of the residents of Boca Raton, North Broward and Palm Beach County through an extraordinary series of performing arts events and lectures every March.  The Festival has received numerous awards, most recently being named the No. 1 cultural event in the “Top 10 Florida Events for 2022” by Social Magazine.

As a non-profit organization, Festival of the Arts BOCA is also the regional leader in cultural arts education and supporting local performers and musicians – introducing new audiences to great music and exposing over 10,000 young people to the great artists through educational outreach and master classes. The images are remarkable: Sir James and Lady Jeanne Galway leading over 50 of the best flute students in the region in a public master class, Itzhak Perlman doing a Q & A with students, two-time Grammy Award nominee Joey Alexander playing with the Don Estridge High Tech. Middle School Jazz Band, and physicist Brian Greene igniting the imaginations of students at West Boca Regional High School and throughout Palm beach County via live streaming.

In addition, over 1,000 Festival tickets are donated to students and teachers every Festival.

Virtual tickets to the Authors & Ideas events are available for $10.  Admission to the Rotary Club Future Stars Competition is free.