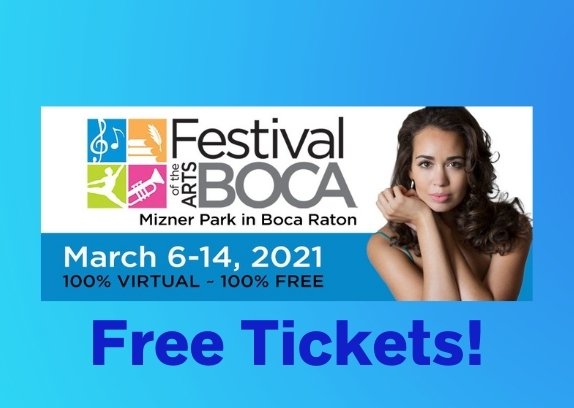 “Our 15th installment will celebrate the tremendous talent in South Florida, showcase the beauty of Boca from various venues and honor the legacy of our co-founder, Charlie Siemon,” said Joanna Marie Kaye, Executive Director of Festival of the Arts Boca.  “Charlie would have been thrilled to see that paradoxically, we have the opportunity to reach our biggest audience ever in 2021 with all of our events filmed and broadcast worldwide.”

The Festival will open on Saturday, March 6 with Boca native and Metropolitan Opera star soprano Nadine Sierra and friends, in concert at the Boca Raton Airport.

Hailed as one of the most promising young talents in opera today, Sierra was named the Richard Tucker Award winner in 2017 and the 2018 Beverly Sills Artist Award by the Metropolitan Opera.  Having made a string of successful debuts at the Met, Teatro alla Scala, Opéra national de Paris, and Staatsoper Berlin, she has become a fixture at many of the top houses around the world.  She released her debut album, There’s a Place for Us, in 2018.

Monday, March 8, 7 p.m.
Admiral James Stavridis author and retired four-star U.S. Naval officer, will talk about leadership.  He is currently an Operating Executive of The Carlyle Group, a global investment firm and Chair of the Board of Counselors of McLarty Associates, an international consulting firm. Previously he served for five years as the Dean of The Fletcher School of Law and Diplomacy at Tufts University. He led the NATO Alliance in global operations from 2009 to 2013 as Supreme Allied Commander with responsibility for Afghanistan, Libya, the Balkans, Syria, counter piracy, and cyber security. He also served as Commander of U.S. Southern Command, the first Naval officer to do so, with responsibility for all military operations in Latin America from 2006-2009. He earned more than 50 medals, including 28 from foreign nations in his 37-year military career.

Tuesday, March 9, 7 p.m.
Bruce Feiler will discuss his latest book, a top 10 New York Times bestseller, Life Is In the Transitions:  Mastering Change at Any Age, a collection of hundreds of life stories, exploring how we can navigate life’s growing number of transitions to live with more meaning, purpose, and joy.  Feiler is the author of seven New York Times bestsellers; the presenter of two prime-time series on PBS; and the inspiration for the drama series COUNCIL OF DADS on NBC.  Feiler’s two TED Talks have been viewed more than two million times.

Thursday, March 11, 7 p.m.
The Festival will welcome Sonia Shah, science journalist and prize-winning author of the heavily lauded, The Next Great Migration: The Beauty and Terror of Life on the Move, that explores our centuries-long assumptions about migration through science, history, and reporting, predicting its lifesaving power in the face of climate change.  Her 2016 book, Pandemic: Tracking Contagions from Cholera to Coronaviruses and Beyond was released in August 2020 with a new preface and has been called “superbly written,” (The Economist) , “bracingly intelligent” (Nature),  “provocative” and “chilling,” (New York Times), a “lively, rigorously researched and highly informative read,” (Wall Street Journal) and “absorbing, complex, and ominous,” (Publishers Weekly). Sonia Shah discusses the fascinating interplay of microbes, ecosystems, wildlife and livestock and human behavior.  In her July 2020 essay in the Nation she writes, “It’s time for a new story, one that more accurately captures the reality of how contagions unfold and why. In this story, pandemics would be cast as both a biological reality and a social phenomenon shaped by human agency.”

On Saturday, March 13, 7 p.m.
Tune in for a salon evening with the Festival of the Arts Boca All-Stars featuring Constantine Kitsopoulos, Festival Music Director, and musicians from the Festival Orchestra.

Kitsopoulos has established himself as a dynamic conductor known for his ability to work in many different genres and settings.  He is equally at home with opera, symphonic repertoire, film with live orchestra, music theatre, and composition.  His work has taken him all over the world where he has conducted the major orchestras of North America, the Hong Kong Philharmonic, and the Tokyo Philharmonic.  In addition to Maestro Kitsopoulos’ engagements as guest conductor, he is Music Director of the Festival of the Arts Boca, and General Director of Chatham Opera and New York Grand Opera.

The Festival will close on Sunday, March 14, 7 p.m., with Grammy-Award winning South Florida favorite, jazz flutist Nestor Torres, and his band at the Boca Raton Resort and Club.

If a flute could talk and sing, it would certainly be in the voice of Nestor Torres, for he speaks through his instrument.  Nominated for several Latin Grammy Awards, Torres won it in 2001 for his CD This Side of Paradise, a bittersweet victory given the fact that the Awards’ ceremony was scheduled for 9/11/2001. His CD “Dances, Prayers & Meditations for Peace” signaled a new departure, as a reflection of his experience on 9/11.  Torres’s most recent Grammy®-nominated CD, Nouveau Latino, heralds the flautist’s exuberant return to his Salsa and Latin Jazz roots. In addition to his achievements in the studio and on the stage, Torres has received numerous awards and commendations, including two honorary doctorates for his commitment to youth, education, and cultural exchanges.

❤ Happy Mother's Day to the Best #Mom Ever from

Fantastic Night at Mixology 2021 at the New Delray